Home RAM How to Lower RAM Usage? Some Interesting Tips And Method To Clean... 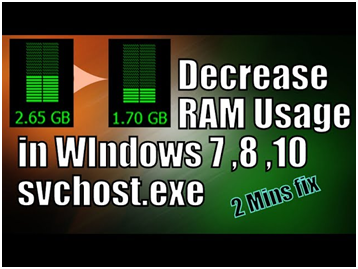 RAM stands for Random Access Memory. The information stored in RAM is retrievable by your computer’s central processing unit (CPU) and it’s often referred to as “working memory.”

Your computer’s Random Access Memory (RAM) is stored on a memory chip that is typically found on the motherboard. RAM is the hub of storage for all active and running programs and processes. Your computer uses the information it has stored in RAM to complete tasks while simultaneously receiving and performing other functions.

Your computer retrieves this information from RAM when you ask or need something done, like saving an important document before shutting down, opening up a game to play friends online, or opening up a new window on your favorite website.

Why computer slow down?

Your computer starts at regular speed once you boot up but slow down when you open several programs simultaneously that are asking for help from its Random Access Memory (RAM). The reason why computers slow down even with plenty of RAM is because hard drives are considerably slower than RAM.

As more programs start up, it takes longer for your computer to access the information because of the time it takes for it to reach that information through all the layers of your computer’s hard drive. Once you shut down multiple programs or restart your computer completely, you will notice a dramatic speed increase in almost every area of using your computer. This is partly due to the fact that when you reboot everything is being accessed from scratch and thus speeds up significantly.

How to lower RAM usage?

To run the PC faster and to clear RAM here are some tips given below:

Download this free program called Crap Cleaner which will clean up all of those useless files that are clogging up even more space on your hard drive.

One is easy, just go to your control panel. You can also right-click on a programs shortcut and select ‘Uninstall’ from the menu that pops up.

Your computer constantly creates temporary files as it runs processes, such as downloading or installing programs or webpages. These files are useless since they only exist momentarily and take up space otherwise unneeded, so it’s best to delete them regularly with specialized program like Crap Cleaner.

4. Clear Out Your Cache

Your internet browser (e.g.: Mozilla Firefox) has a cache that stores website documents and images just in case you want to use them again without having to download them over and over again every time you go back to those pages. It’s handy for browsing, but completely unneeded for pages you’ve already seen.

Some programs start up automatically when your computer boots up so they can run in the background and do their thing without you having to think about them, but these are useless programs that slow down your boot time. Start by uninstalling any startup program that gives you no added value (eg: Adobe Reader) or is strictly related to one of the other unnecessary applications you deleted (eg: Slim Drivers if you uninstalled Driver Cleaner 6).

If you convert large video or audio files to MP3s instead of letting your computer store bloated files it will free up space for your RAM much faster than simply deleting said files.

Read More: How To Free Up RAM On Mac? Step-by-Step Instructions

Why PC running out of memory?

When you are running out of memory in your personal computer, it is because your computer starts to use the virtual memory which will be shown by hard disk or SSD when needed. Virtual Memory is slower than physical memory, if you want to speed up the hard disk read/write speed ,you should delete some useless data in your PC .It`s easy for knowing how to manage the Windows 10 Virtual Memory Settings.

How to reduce data in RAM?

There are several ways to reduce the amount of data that is stored in RAM. The first is closing all applications that aren’t necessary for your current task, but this will vary depending on what you’re doing at the time. For example, if you’re typing up a paper in Microsoft Word and don’t need any other programs running, you can close everything else. This frees up RAM for Word to use without having to load files from virtual memory (i.e., your hard drive).

You may also try closing some apps that are open “in the background” but not currently being used. The easiest place for this is on a Mac is with command+tab, which will give you a list of running apps and let you select one to close it. On Windows, use alt+tab instead.

What does it do?

Unlike other types of memory, the data within RAM is not permanent. If you turn off your computer or reboot it, anything contained within the RAM will be lost unless you’ve saved it elsewhere on your machine, or transferred it to another device such as an external hard drive.

If you’ve ever noticed how fast your computer runs when first turning it on, you can thank your operating system for using what’s called virtual memory. Operating systems use a portion of your disk storage (which functions like a file cabinet) as though it were additional RAM, this allows them to temporarily store some stuff that would typically be stored in RAM. The advantage here is that your computer can run more applications and programs simultaneously if their information is temporarily saved to disk storage rather than RAM, meaning you don’t have to wait for the operating system and other things to load into memory before you can use them.

How much RAM do we need?

The amount of RAM you need depends on what kind of software you’re running, your personal needs, and how much free disk space you have. If it’s available, the general rule is that RAM should ideally be about twice as large as your working set-the amount of data being accessed by all active processes at any given moment. If your computer doesn’t have enough memory, it will slow down considerably while trying to handle a larger working set. This can cause a noticeable lag in performance, especially during memory-intensive tasks such as video editing and gaming.

The typical computer user doesn’t need to upgrade their RAM unless they’re experiencing these types of symptoms: Frequent application crashes or freezes Fading or discoloration of computer screen unusual sounds from the PC.

In general, it’s best to avoid upgrading your RAM on your own. An inexperienced hand can easily break something during installation, which could end up costing much more than the RAM itself if you have to take your machine into a professional for repairs. Plus, there’s always the chance that you may install too much (or not enough) RAM, either of which can cause problems. In general, you should upgrade your RAM if a hardware diagnostic test indicates that your computer’s performance is being negatively affected by insufficient memory.

How much does it cost?

You can buy compatible laptop RAM from a number of retailers in a range of prices and capacities. The price will depend in part on the type of RAM you’re buying (DDR2, DDR3, etc.), which determines its compatibility with different machines and manufacturers. Generally speaking, adding more memory will cost you less money per gigabyte than adding an additional hard drive or solid-state drive to your machine. However, always make sure to check for compatibility before completing any upgrades. For example, getting the wrong kind of laptop RAM could damage your machine.

Is it good to clean RAM by your own?

No, it is not good idea. It is better you should visit an expert for this work.

Is it true that our PC slow down when RAM is full?

Yes, it is absolutely true. When the RAM is full the PC run slowly as compared the free one. So it is better that you should clean the RAM.

How Much Space Does Minecraft Take Up? Everything You Need To Know

How Much Space Does Windows 10 Take Up? Facts You Need To Know

david harnold - September 26, 2022 0
The coming near near video game AUT Trello Latest Universe is a totally rewritten and transformed model of the preceding sport. The replace is...
Read more

oliviaanderson - September 16, 2022 0
Are you searching for the best repair service to fix your mobile because it was water damaged? So you've come to the right place....
Read more

Hassan Shabeer - September 10, 2022 0
This article will explain the differences between DDR2 and ddr3 ram, as well as how to determine what size memory you need for your computer....
Read more

Abdul Rehman - September 5, 2022 0
A tool belt is an accessory that is of vital importance and while some people may not like to wear them as they see...
Read more

oliviaanderson - August 30, 2022 0
Cell phones have made our lives easier because of their advanced technology. People rarely used mobile phones in the early years, and limited people...
Read more

The various tools for technical analysis used in stock trading in...

How Much Space Does Windows 10 Take Up? Facts You Need...

How Much Space Does Minecraft Take Up? Everything You Need To...