Home How to What Is Wire Stripping Machine? Everything You Need To Know 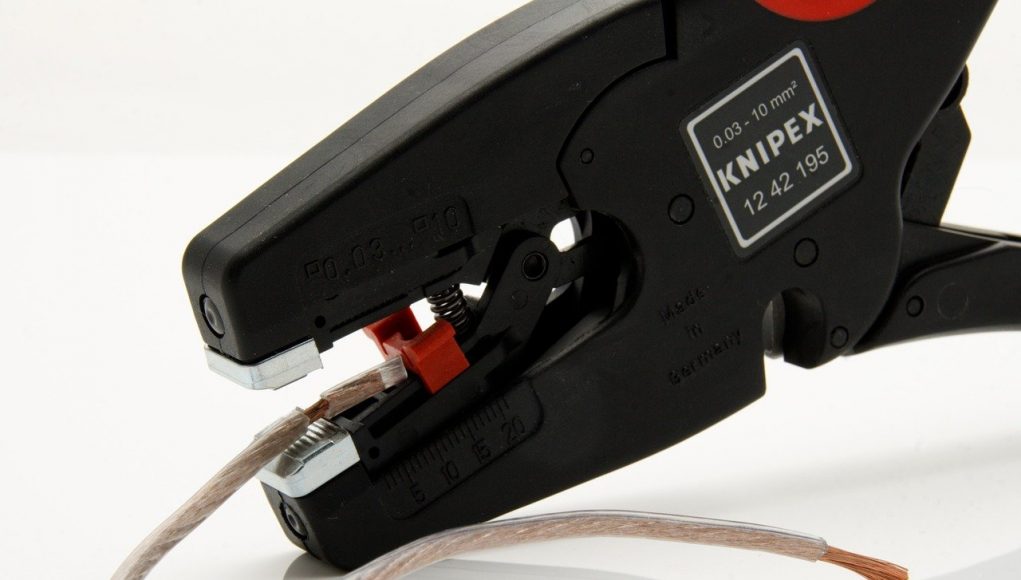 A wire stripping machine is a machine used to strip the insulation from electric and telecommunications wires. A cutting device, such as a knife or shear, first severs the wire close to the insulation. The insulation is then pulled off by sprockets which rotate two abrasive-covered wheels that press against both sides of the insulated part of the wire; the relative speed between the wheel and wire controls how deeply into (and through) it penetrates. Machines designed for specific cable types have interchangeable “jacket grip” dies which match standard cable diameters and grip different parts of the insulated conductor.

Wire stripping machines were introduced in Britain around 1940. Prior to this, cables had been stripped by hacksaws and knives. Wire strippers are now employed by communications, electric utility and electrical contractors. Industrial arc welding machines are often used to strip insulation from large conductors. The heated cutting head is pressed against the wire, causing the insulation to melt and burn away. This is an efficient method for bulk cable stripping.

Prior to 1940 most telephone wire was stripped by either pulling it through a die or wrapping the wire around a metal rod called a “monkey”. A monkey can be used with an insulating stick, which provides some additional mechanical support of the wire during insulation removal. Pulling worked well on small gauge wire but tended to break very thin wires before all of the insulation was pulled free. A new machine was developed that would simultaneously pull and cut the insulation with one set of gears.

There are two main designs

Typical cable stripping machines consist of two sprocket wheels. The first wheel severs the cable sheath near the end of the insulation using a sharp knife. The second wheel then strips off the sheath from both sides of the insulated conductor with its alternating cutters. Depending on design, one or more springs may be used to exert pressure against these cutting blades. Cable jackets range in size and thickness depending on application and use (see “conductor” below). For example, speaker wire jacketing is about 0.02 inches (0.5 mm) thick whereas high-voltage power cables can have jackets over 0.25 inches (6 mm) thick. The total number of blades varies from 4 to 7 on most machines. Some models permit the operator to adjust the blade depth for different cable types.

Read More: How to get Shaders in Minecraft? All the comprehensive guide

Cable stripping machines typically use a threaded rod and nut mechanism with adjustable knife penetration depth, which allows the user to trim back insulation without damaging the conductor inside. Depth adjustment is accomplished by rotating an internal sleeve in the body of machine until its opening aligns with one or more screw heads protruding from within an insulated cover plate on which the sprocket wheels ride.

The stripped wires are released onto a rotating drum, which keeps them separated and untangled. As the wire is pulled off the first sprocket wheel it must pass through a shaping die to reduce its diameter so that it can fit into other parts of the electrical or electronic system without damaging anything. The wire coolant typically used in larger stripping machines is water with food-grade coloring.[4] This fluid helps keep the metal conductor from becoming too hot as it moves through the machine. It also removes any burrs created by contact between cable sheathing and cutting blades on gears inside. A few models instead use an oil bath to cool down mechanics during operation.

Cable strippers can often be used in modular units, allowing different cable and insulation types to be processed at the same time. For example: A four-channel system with two stripping units can process eight cables simultaneously (two per channel), while a six-channel machine can handle 12 cables at once. Some machines have an automatic wire feeder, which makes the stripping job easier for anyone who has to strip a lot of wires on a regular basis. For example, one company manufactures an automatic feed unit that holds 40 spools of wire. This allows workers to load several spools into this device instead of having to pre-wind each individual wire onto a small slitting or cutting wheel attached directly to the stripping machine’s shaft.

Many stripping machines have an adjustable tension control. This feature allows the user to adjust for different cable diameters. The machine can also be equipped with a wire feed lock-out mechanism that prevents stripping blades on the sprocket wheels from spinning when an operator touches or feeds too much wire through the machine all at once. Many models of wire strippers are not designed for unattended operation, so they can become dangerous if left alone without this safety device.

Certain types of plastic insulation are difficult to strip cleanly using automatic wire stripping machines. To solve this problem, some manufacturers make special purpose tools intended specifically for removing these particular materials in addition to others that standard designs might damage.

What equipment is used to strip wires?

Wire strippers resemble a pair of pliers or scissors. Although the majority of wire strippers are capable of handling a variety of tasks, their main role is to strip the insulation from wire ends. Slotted cutting blades found in the stripper’s jaws help to achieve this.

What is MyEnvoyAir, and how does it work?